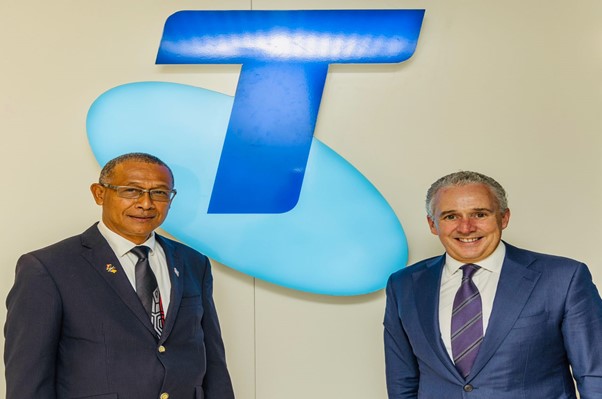 Treasurer Ling-Stuckey made the statement  at  a meeting with Telstra Chief Executive Officer,  Mr. Andy Penn in Melbourne, Australia on February  1  2022.

“Broader access for our people to modern, low-cost data and voice communications can make PNG a safer, richer and better educated nation and these possibilities were at the centre of the discussions I had with the head of Telstra, Andy Penn.”

“Around the globe, it is recognised  that modern telecommunications can connect people in ways simply not possible using traditional land-line phone services.

“A good, fast data connection can allow our small and medium-sized enterprises to reach out to markets throughout the world without having to go through middlemen.

“This means better access to bigger markets with greater returns to our entrepreneurs.”

“Connections to families and wantoks is much easier and it could even make it easier to watch the State of Originn.”

He emphasized that getting the gains from a better telecommunications sector will require much greater investment in our infrastructure such as more towers in more location.

“It will require good regulation to ensure that the gains from the submarine cables to PNG are shared broadly and there is a need to improve greater access to the more modern 4G network rather than the older 2G and 3G networks,” he further stated.

Mr  Ling -Stuckey’s discussions with Telstra highlighted the importance of such modernisation and increased investment in the telecommunications sector as Telstra is likely to complete its purchase of Digicel Pacific soon.