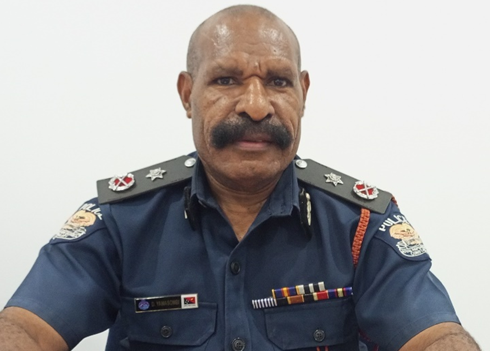 Following the dissatisfaction expressed by the Prime Minister on the lawlessness in NCD, Commissioner of Police David Manning appointed Mr Yamasombi to support the Divisional Commander of NCD/Central, Mr Anthony Wagambie Jnr, in his crime fight strategies in the city.

“In that regard I’ve done a supplementary operation order in relation to what the NCD Divisional Commander has already instituted on the ground,” says Mr Yamasombi.

He said resources will be made available from his wing to fully support the NCD/Central Command.

“We will be targeting known hotspots within the city,” adding, “All suspects apprehended during the operation will be carefully profiled.”

Mr Yamasombi further explained, their fingerprints, photographs and full details of who they are will be collected and stored.

“This should help us in the long run to keep tag of people who commit crimes in the city because a lot of times these are the same people who keep doing the same thing over and over but no proper tags were kept on them.

“People must now feel the full force of the law,” said Mr Yamasombi.

The Specialist Operations Wing consists of the Special Services Division (SSD), Dog Unit, Water Police and the Police Band, and have sufficient manpower and will be committed to this exercise.

NCD has three zones and each will be assigned a directorate and have them rotate the units from within these policing zones in the city after a week.

Mr Yamasombi said the bandsmen will be divided between the three directorates to beef up numbers in this exercise.

“This will also help us see what difference we can make in terms of the capabilities we have and so the resources these directorates have will be committed to the zone we place them in.

“On the flip side, I will also be able to see the effectiveness of these Directorates. This will be a testing time for our men as well,” said Mr Yamasombi.

He added, Police will also be executing warrants so all offences will be specified in order to obtain warrant on all forms of offences.

Instructions have been issued to the Crimes Division, to have prosecutors apply to the magistrates in court upon successful conviction of suspects to have them repatriated back to their home provinces.

“There is a provision under the District Courts Act for the magistrates to exercise so we will be invoking that to have people who are convicted in the city to be repatriated back to their home provinces,” says Mr Yamasombi.

Meantime, the PNG Defence Force and Correctional Services have been notified of the operation and will be on board once the   necessary legal instruments are signed.